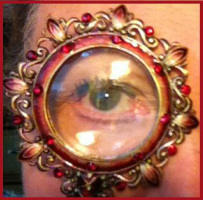 My creative journey started in the backyard when I fashioned a head piece for Dale Arden, love interest of Flash Gordon, from a roll of cellophane.

In first grade, I expanded my performance repertoire to include performances of “Green Door,” on the playground.  While the other kids were enjoying their baby tunes, I was drawn to songs that celebrate drinking and smoking.  My performance art evolved into baton twirling and acting in high school and junior college theatre productions.

After junior college, I was a flight attendant for five years.  I was a great “stew,” except for a few flaws – fear of flying, vertigo, clumsiness, forgetfulness and bad judgment.  And although I seem like a nice person, if any of the planes on which I worked crashed, I would probably have been the first one down the slide.  Just kidding. ;-)

I took another detour from my first love when I earned a masters in language sciences and speech/language pathology.  Although helping people with communication disorders is challenging and rewarding, my love of performing laid dormant deep in my heart.

The course of my life changed in the summer of 2001.  As part of my bucket list, I did a set for open mic night at the Laff Stop in Houston, Texas.  A lot of my friends came to the show to support my madness.  Their laughter gave me a false sense of talent.

After my stand-up comic success, I went on to perform at some cheesy venues and sports bar and some no-name-joint on the side of the Hardy toll road. I was booed and hissed a few times, but I was told that this is the way to earn one’s chops (whatever that means).

Performing at the Laff Stop started me down a creative path of no return.  A writer friend in the audience that night connected me with the Fieldworks Performance Workshops as well as donna e. perkins and the Archway Art Gallery Readers.

Through Fieldworks, I met jhon r. stronks, who became my performance collaborator and director.  Together, we crafted my 60th birthday, one-woman show:  Margo:  60 & Un-censored.

One of the characters in my show, “the diva colon preparing for her day on camera,” was revived for the Houston Fringe Festival in 2009.  “The Colon Show” won audience favorite during the “Anything Goes” weekend of the festival, and I was invited back to participate in the Fringe Festival of 2010.  Other Fringe Festival pieces include:  What’s Eating Martha (a madcap romp through the mind of a woman with an eating disorder) and Margo, Rita and the Pee Pee Dress (a travelogue of my 10-hour trip from Houston to the Woodlands when Hurricane Rita was “heading” for Houston).  With the help of Neil Ellis Orts in January 2013, we performed some of my pieces in the FronteraFest in Austin, Texas.  Other Fringe performances with videos are "Bitch is Ready for Tea" (2015) and Meditation for Regular People (2017).

* My music video, Hope is My Veins, won a silver Remi award at the WorldFest Film Festival, 2016.

* My music video, Liz’ Song, has won the following awards –

* Selected for screening at the Glen Rose Film Festival

Sidewalk Psychic and Bitch is Ready for Tea has screened at the Gulf Coast Film and Video Festivals - 2014 & 2015.

San Antonio, University of Houston.
​
* Antidote for the Wicked World We Live In* is a rap video that has screened at the Gulf Coast Film & Video Festival and the Prison City Film Festival.
​
In addition to making serious films, I enjoy making web commercials and videos to enhance my performance pieces.   Check out “The Artwork of Donna E. Perkins,” and “The Artwork of Johnny Rojas,” under links.

In 2010, two of my poems were published in anthologies –

* The Reunion – Love Over 60: An Anthology of Women's Poems
* Let Love Be the Change - music video with Jaunetta Cooper / won a Silver Award at WorldFest in Houston, Texas 2017

Contact me if you would like to chat about ways my writing, performance, voice & speech coaching, or filmmaking skills can enhance your professional or artistic endeavors - http://www.SpeechCoachMargo.com/.

The Colon Show from The Fringe Festival 2012.  Photo by Steve Patlan.

Selfie in my bedroom preparing to perform "Juanita."